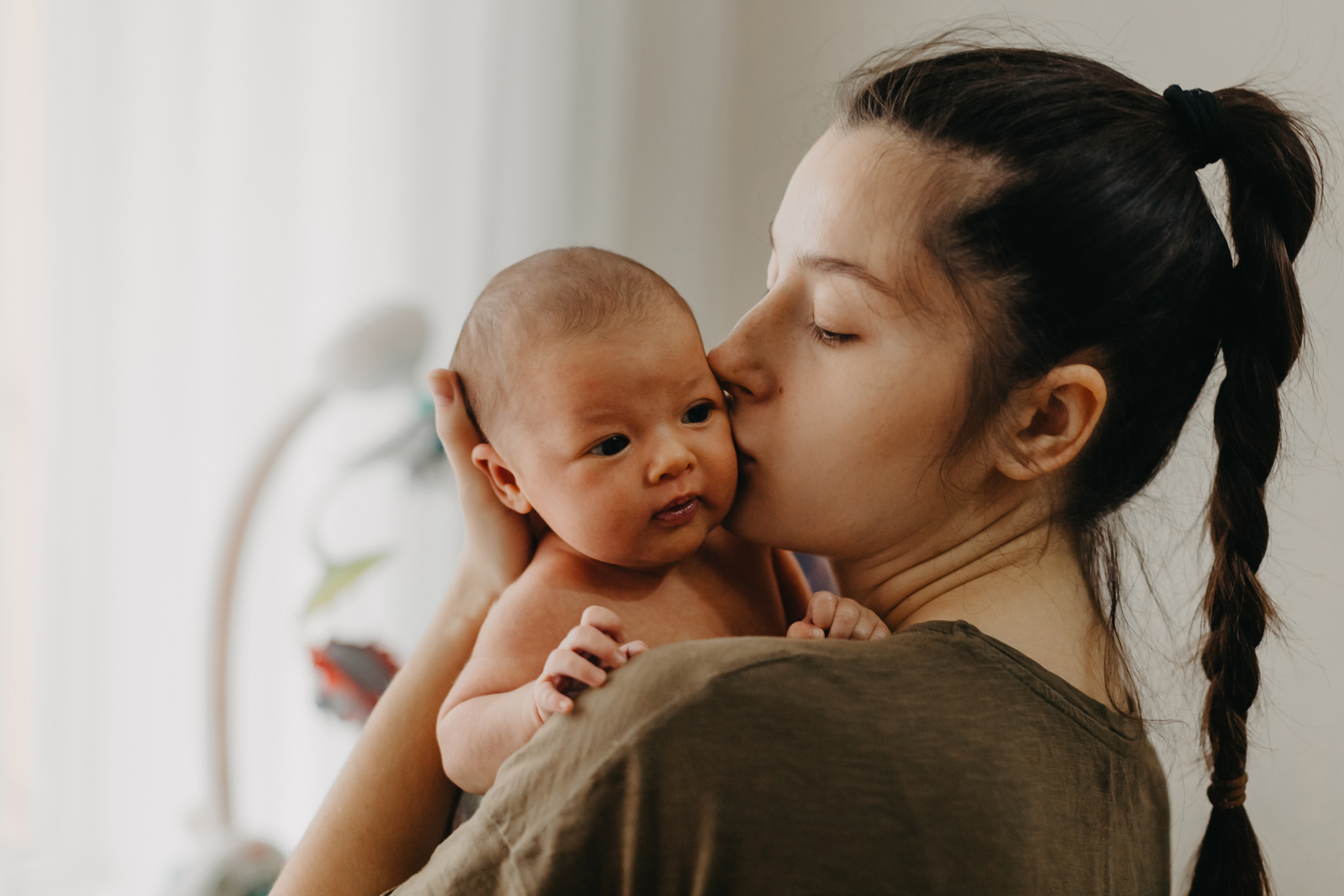 Before I had children I was an expert on raising kids. After all, I had taken numerous college courses in human psychology. I understood the concepts of influence, incentive, and insistence. I read nearly every James Dobson book on child-rearing.

I often watched people wrestle with their children and wondered why they had so much trouble. Oftentimes the errors were glaring: threats made with no follow-through; or, voices raised between a parent and a child who lacks the cognitive skills to either process the argument or defend a position.

If asked, I could have told them how to do it right.

And then I had children!

Wisdom vanished. The presumed absolutes became variables, and the variables became a nightmare. It seemed easy sitting in the bleachers second-guessing how children should be raised. Once I was in the arena, my eyes were opened.

I have often wondered if I would view the abortion issue differently if I were a woman. It is common for abortion advocates to accuse men of narrow-mindedness on an issue that only peripherally involves them. After all, the logic goes: how would a man like it to be told how he can or cannot use his own body.

In deference to the “my body, my choice” argument, most of us likely want as much freedom to do with our bodies as we wish.

I never liked being told what I should eat, what I should wear, and what I should do with my life. I really don’t like it when people tell me how often I should see the doctor, when to have a medical test, or what medicine I should take.

At my core, I am a researcher. I love discovering information and gathering facts. After laying out those facts, I make a measured judgment as to what I want to do. I like it that way. I don’t like being told what I can and cannot do.

So I get it. The “my body, my choice” argument resonates loudly and with clarity.

Yet We Are Not Alone

Finding a middle ground on abortion seems unattainable. Both sides are deeply principled and entrenched in their positions. Let’s approach the issue differently. I propose we start with a discussion on the reality that we are not alone.

Loneliness is not good. God stated that plainly in the Garden of Eden (Genesis 2:18). Sharing life on earth, either intimately as spouses or distantly as neighbors, is designed in all creation as an element of good.

Sharing our space demands a more inclusive way of looking at things. Consider the civil regulations of the Mosaic Law. Those rules and ordinances were designed to enable people to live together in a community.

Think about it this way: of all the words Jesus spoke from the cross, which were the most crushing? “My God, my God, why have you forsaken me?” The feeling of complete abandonment is literally hell on earth. We are not meant to be alone.

We are not alone. With more people, there must be ground rules to protect everyone. I may let someone who needs to borrow a car use mine, but that does not mean I can use anyone’s car at will. When no social conventions govern such situations, laws and regulations define how we live together in this world.

Admittedly, in the abortion issue, we are not talking about taking our neighbor’s car. We are talking about the “right” to stop whatever is growing in our bodies.

If we were talking about a developing tumor I would guess nearly everyone would agree with a decision to remove it. In fact, living with a tumor rather than easily and safely removing it might raise a unified voice questioning one’s sanity. Making the decision to remove a tumor has widespread support.

What exists in the womb at the center of the abortion debate is not a tumor, an undesired appendage, or even a parasite.

Those are not my words alone, or simply the words of pro-life advocates. The abortion advocacy argument of this generation accepts that in abortion a life is lost.

The tipping point in the abortion debate today involves whether there are degrees of life, in which some lives are subordinate to other lives.

On the surface, it appears that children are subordinate lives. Their rights are limited and their well-being is overseen by their parents.

The limitation of children’s rights is not because they are deemed an inferior form of life. Rather, the rights of children are limited for their personal protection and well-being. A child lacks the reasoning skills to make consistently good choices that are more apt to come with age, learning, and experience.

Evidence of this is seen in the illegality of parents and/or guardians abusing, assaulting, or killing their children. They may not neglect them. In fact, in some places, berating them is a punishable offense. Limiting the rights of children is designed to protect them.

There are limits on what we do when lives are at stake. Regulations on substance abuse would be a good example. Bullying or goading people into suicide is another example.

Some argue the choices we make with regard to our own bodies are victimless decisions. The logic fails because of our social environment. Every decision we make concerning our bodies impacts others to a larger or smaller degree. People cannot run around their subdivision naked nor defecate on their neighbors’ properties. One cannot use illegal drugs because they are harmful and such use creates a social environment that is not good for society as a whole.

The weakness of the “my body, my choice” argument is that we are not alone. Even if we do not want to discuss life growing in the womb, each person lives out a social experience. Decisions made about our own bodies are never just about our own bodies. They are seen, heard, and experienced in a social setting that involves spouses, friends, partners, neighbors, family members, and coworkers.

One’s right to listen to music at 85 decibels is hemmed in by the right of the neighbor who doesn’t want to listen to it. It is part of living with others.

As such, despite the “It’s my body and therefore my choice,” rhetoric, there are always others involved – always! Like most decisions, the abortion decision has far-reaching tentacles.

The courts have ruled the right to abortion is absolute, yet the father of the unborn child (yes, we can call it a child) has no say in the abortion decision. That does not mean, however, that the father is not affected by the decision. There are also grandparents and friends who are impacted by such decisions.

We are not alone. We are part of a whole.

What makes the Christian perspective in this dialogue especially challenging is that we not only accept that we are a communal species but as such we are to think more of others than ourselves (Phil. 2:3-4).

Perhaps the baby’s father has no legal say but, biblically speaking, his voice matters. Perhaps there are grandparents and friends who see more in this than just a decision. They are not entitled to the decision, but the decision should be made with others in mind as well.

As it stands, the abortion debate pits the baby’s rights against the mother’s. Rather than an endless argument on that point, maybe the direction in exploring the issue is found in making abortion the least desirable of all options.

Genuine concerns arise about having a child when one is single, poor, and under-educated. We need to find ways to help a mother live with the decision not to end her unborn child’s life, whether it happens through community organizations, our congregations, or our branches of government.

I might add, that this involves more than just creating a program. I am still surprised at how hard it is to find available resources.

When we relocated New Beginnings – A Home for Mothers from Denver to Milwaukee it was like starting over. It is very difficult to identify all available resources. The programs to help may be out there, but they are hard to find.

From a Biblical standpoint, the humanity of an unborn child is clear. From a biological standpoint, the rhetoric has matured to the realization that in abortion a life is lost. From a practical perspective, both sides of the argument continue to press for their agendas. As those debates continue, let’s consider better and easily accessible resources for single mothers. Let’s consider housing, education, training, and an emphasis on Christian living as a parent, a member of society, and as a child of God.

If I were a single mother I know I would not want to take the life that is growing in me. If I were pressured and convinced to have an abortion, I would imagine it to be an act of desperation. Desperation is best alleviated with alternatives. It is one thing to insist a woman not take the life of her unborn child. It is certainly better to provide her with viable alternatives.

Christiaan Barnard, the famed heart surgeon who performed the first heart transplant, talked about the desperation of patients. He said: “If a lion chases you to the bank of a river filled with crocodiles, you will leap into the water convinced you have a chance to swim to the other side. But you would not accept such odds if there were no lion.” An unplanned and unwanted pregnancy is a ferocious lion for a young mother who sees no alternatives.

For all of us, a middle ground might be best seen in creating and promoting alternatives.

We can callously say, “You made your bed, now sleep in it,” but is that really the flavor of Matthew 25:31ff? Alternatives provide real opportunities for a new beginning. Let’s give that a try.