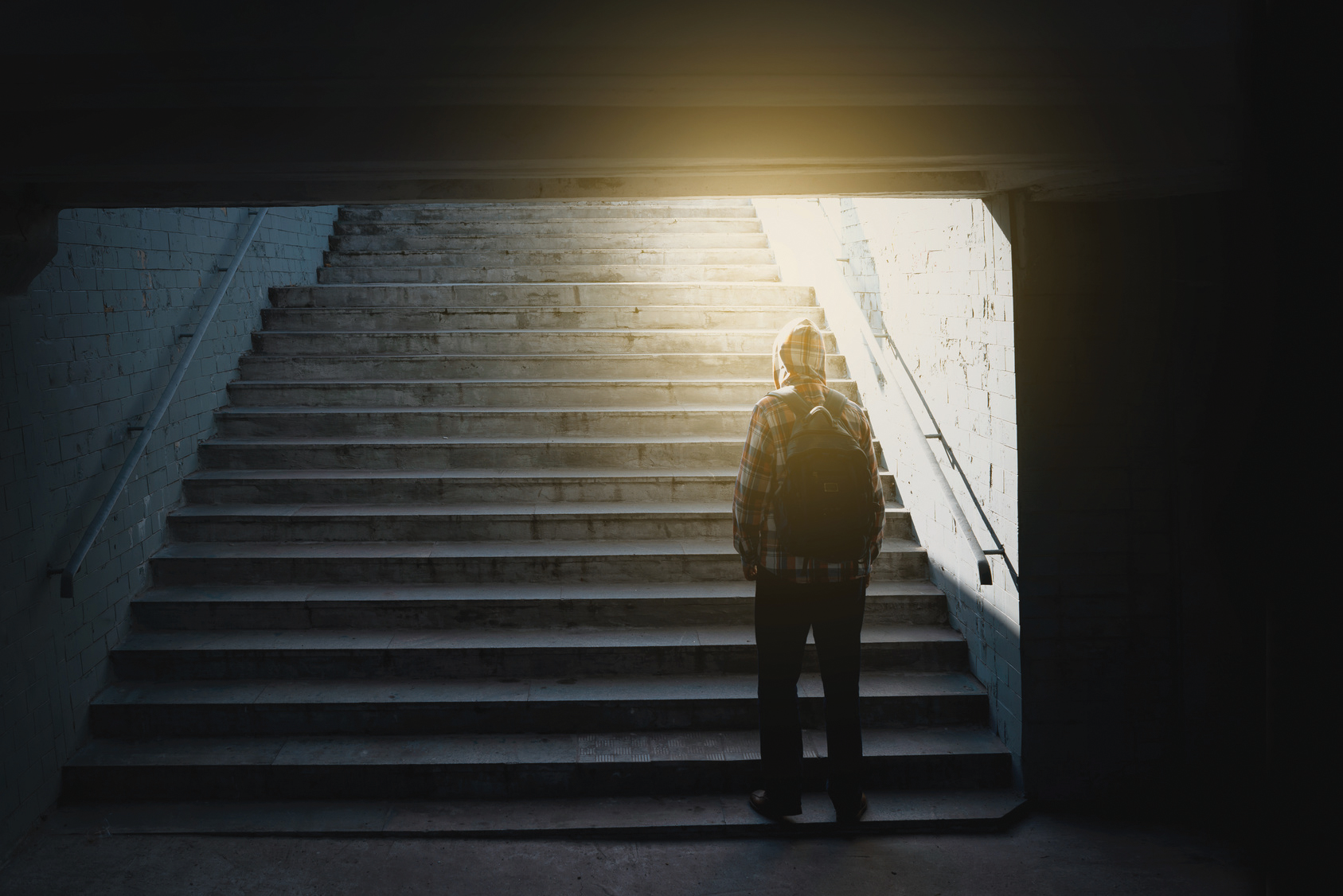 It was a typical Saturday morning. Mark slept in because he worked late. Life had settled down since he finished jail time for drug possession. He liked his second-shift job. He was a single parent with his three-year-old daughter enrolled in the church’s preschool ministry. He and his child lived with his parents in their home to help him get on his feet.

Mark had a quick breakfast, greeted his father, said he was still tired, and went back to bed. Hours later his mother checked on him and faced her worst nightmare – Mark died from a heroin overdose. At 29 years of age, his life was over. He left behind a little girl to be raised by her grandparents. The child never sees her mother, and now her father is gone too.

Death by heroin overdose occurs at least 42 times every day in America. That figure has increased fivefold since 2010.

One has about a 1.6 times chance of dying from any drug overdose than dying in a traffic accident.

One has a 1.5 times greater chance of dying from any drug overdose than from breast cancer.

Whether dying from gun violence, in a traffic accident, as a pedestrian, or from breast cancer, a person’s death as the result of a drug overdose is often viewed as a self-inflicted problem.

Scripture admonishes: “The one who is unwilling to work shall not eat” (2 Thessalonians 3:10).

This is reflected in a societal attitude that has a low tolerance for people who create their own troubles. A sharp line of concern is drawn between sympathy for those who cannot work and those who will not work. We are quicker to help the helpless than the able-bodied.

We expect people to know better. If they know better they should do better without expecting others to clean up their messes. It is a harsh judgment on a malady we are still learning to understand.

Research and reality demonstrate more to a drug problem than just bad decision-making.

Fatalities from drug overdoses often occur because drug use became an addiction. The American Psychiatric Association describes an addiction as a complex condition that qualifies as a “brain disease.” It is a chemically-stimulated, biological event that lures, deceives, and controls an individual.

It controls you! Addiction creates a nearly-uncontrollable urge or desire for more.

Consider for a moment the familiar addiction of cigarette smoking. The nicotine creates chemical changes in the brain that make it addictive. If you talk to a heavy ex-smoker, he or she will tell you that, even decades years later, the craving lingers.

In 1996 Green Bay Packer quarterback Brett Favre voluntarily entered the National Football League’s substance abuse program. He used Vicodin three years earlier to manage pain. In time an occasional pill became 15 pills in a single day. The addiction lured him in, and it required more and more pills to give him the same results.

The path is familiar and predictable. A dependence begins with the use of a legal drug, like Vicodin. In time, it demands more pills to obtain the same results. It doesn’t take long before the addiction becomes very expensive. The cost often transitions people from the use of legal drugs to illegal ones. Heroin is a cheap alternative than expensive opioids on the street. That is why some call it “the poor man’s Vicodin.”

Former CBS newsman, Dan Rather, wrote this about his experience with heroin:
I had someone at the Houston police station shoot me with heroin so I could do a story about it. The experience was a special kind of hell. I came out understanding full well how one could be addicted to ‘smack,’ and quickly.

For some, the journey into addiction begins innocently. In an attempt to alleviate pain, opioids provide relief. What starts off working well becomes less effective. It compels the user to take more to mitigate the pain. In time the body begins to crave the physiological “rush” provided by the drugs.

On New Year’s Day more than 20 years ago, I decided to go into the office to work for a few hours before gathering with friends to watch the Rose Bowl. In the late morning, I received an unexpected and piercingly-sharp pain in my lower abdomen. I had never experienced anything like it. It felt like a sword had run through me.

I crumpled to the floor and called my wife to take me to the hospital. As she drove I gave instructions on the location of the insurance policies and ways to care for our young daughters. I believed I was nearing death.

It turned out I experienced my first kidney stone. The best description given to me of the experience was, “Kidney stones won’t kill you – you just wish they would.” The pain was excruciating – until the doctor gave me a shot of some variant of opioid, codeine. The relief was more than comfortable – it was euphoric. It provided both physical relief and psychological relaxation that was indescribable. My wife described watching my body transform from extreme writhing and tenseness to a “silly-putty” level of serenity. The doctor sent me home with a prescription of a variant of codeine to take until the stone passed.

I actually found myself longing for another attack as an excuse to take a pill. What I soon discovered was that one pill a day was all I could handle. More than that amount made me very ill. It turns out I was allergic to codeine.

Nearly 20 years later I have not forgotten the euphoric tranquility I experienced in the hospital when injected with the drug. I don’t know if I will ever forget it or dispense with the longing. Fortunately, the allergic reaction was worse and served as a sufficient deterrent.

There is a power that an addictive substance has which defies the will and any resolve to resist addiction. In my conversations with others and from my own experience, it took a single “hit” to get hooked. I do not think that for most addicted drug users it is ever as simple as just saying “no.”

I see a parallel with the Biblical instructions on facing evil and temptation. Scripture tells us to resist the devil (James 4:7; 1 Peter 5:9) but flee from temptation (1 Corinthians 6:18; 2 Timothy 2:22). Addiction is a temptation. One might believe a person can resist it or stand up to it as if it were the devil in pill form – but it is not. Addiction is a temptation that comes from within. The enemy, therefore, is yourself. It is in you. Because it is in you; you can’t resist it. You have only one choice, and that is to flee.

Addiction involves chemical changes that can linger for decades or even a lifetime. Those considered to have “recovered” from a substance abuse addiction explain many years later the memory or desire cannot be shaken.

I stood in the pulpit and saw that little girl sitting with her grandparents. To my left was a little stand with the urn containing the ash remains of her father. Addiction is a life and a family issue. In fact, I call it a crisis. Mark’s life had ended. The life trajectory of his parents and his daughter were forever altered in that Saturday decision he made to shoot heroin.

Many families have been destroyed by a loved one’s drug addiction. Babies suffer tremors from the residual effects of their mothers’ addictions. Suicidal addicts and their loved ones require extensive counseling.

In hindsight, I believe Mark made the mistake many make. He convinced himself he could control himself in the face of such temptation. He should have fled. In the end, he was wrong, as 64,000 others are wrong every year.

The solution is simple but demanding. It means accepting our helplessness in the face of addiction. It means pursuing a course to flee the situation. The road to recovery begins with the forgiveness found in Christ.

Even with forgiveness, temptations continue, and addictions haunt. The Apostle Paul referred to it as the inexplicable desire he had to keep doing wrong (Romans 7:15ff).

We need to flee from these temptations and engage in a real and effective treatment plan. It means counseling and changing our patterns in life to stop our easy access to drugs. It means vigilance – not only for the moment, or for the next few weeks, but for a lifetime. What may have begun as a foolish choice quickly erodes into overwhelming slavery to something beyond our control.

If you have not done drugs, don’t. If you have started, get help. How do you find help?  Ask your pastor for the name of a Christian counselor in your area who specializes in treating drug/alcohol addiction. WLCFS-Christian Family Solutions (toll-free counseling 800-438-1772 or christianfamilysolutions.org)has clinic locations in multiple states and can provide counseling services in person or through a secure video connection. You can also consider searching for a Christian counselor through Focus on the Family (focusonthefamily.com). It may be very beneficial to schedule a time to meet with a professional who can help you assess your problem area(s) and give recommendations for your care. And if you have never considered what addiction is truly like, consider in yourself the failure all of us have in resisting sin and temptation. Therein is but a brief glimpse into addiction.